The Baykara Lab, located at UC Merced, has been established in 2018 with the aim of exploring mechanics and tribology at the nanoscale.

Research conducted in the Baykara Lab is at the intersection of mechanical engineering, materials science, and applied physics. In particular, state-of-the-art atomic force microscopy (AFM) experiments are performed on a daily basis to conduct fundamental studies in a number of exciting research areas, ranging from the realization of superlubric sliding to understanding the growth dynamics of fungal biofilms.
Some of our current research activities involve:

We have recently shown via AFM-based nano-manipulation experiments that gold and platinum nano-islands slide in a structurally superlubric fashion on graphite under ambient conditions, overcoming the widely-accepted theoretical prediction that molecular contamination would inevitably lead to the breakdown of structural superlubricity under ambient conditions [1, 2]. Our ongoing work involves the development of a complete understanding of remaining physical challenges for structural superlubricity, and devising novel methods to overcome them. 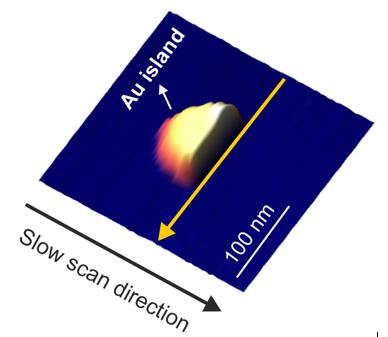 Figure 1. Three-dimensional representation of an AFM image detailing the lateral manipulation of a single gold island on graphite. The island is manipulated by the AFM tip along the yellow arrow.

To extend the lifespan of mechanical systems, wear and friction must be minimized via the utilization of lubricants. On the other hand, traditional fluid-based lubrication schemes fail in nano- and micro-scale systems due to increasing surface-to-volume ratios and associated physical effects. As such, research efforts in recent years have been aimed at characterizing the structure and mechanical properties of various candidates for solid lubricants at increasingly small length scales. In this ongoing project, we utilize AFM to elucidate the fundamental physical mechanisms governing the tribological properties of 2D materials, including but not limited to the "wonder material" graphene [3, 4].

Figure 2. Friction force map acquired on an exfoliated graphene flake (A) situated on a SiO2 substrate (B) via AFM, as well as the corresponding friction force profile along the red arrow.

AFM is a versatile and powerful tool with the capability of nanometer-scale-resolution investigation of a large class of material surfaces. AFM is particularly advantageous in imaging and mechanical spectroscopy of biological materials due to the wide range of environments in which it may be operated.

Using high-resolution AFM measurements under ambient conditions, we have previously shown that the morphology and the mechanical stiffness of functional amyloid nanofibers produced by e. coli bacteria can be genetically tuned [5]. Our current efforts involve extending our AFM imaging and spectroscopy capabilities to liquid environments, as well as different micro-organisms of fundamental and practical relevance. 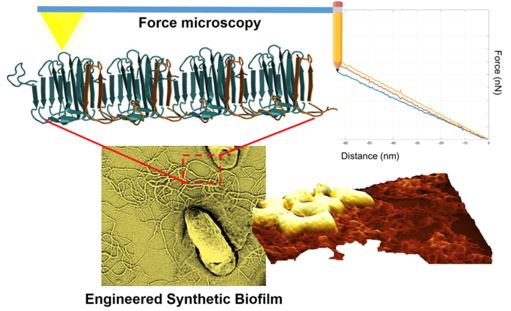 The research activities presented here are being led by the Baykara Lab (PI: Dr. Mehmet Baykara).