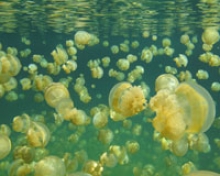 A $1.9 million grant from the National Science Foundation will support a five-year investigation by University of California, Merced, researchers into environmental changes in marine lakes, including why some species adapt while others go extinct.

The grant also is helping spread UC Merced’s research and reputation across the Pacific.

“This research is an outstanding example of our faculty efforts to understand the links between the physical and the biological world,” said Sam Traina, UC Merced’s vice chancellor for research.

Researchers will study the climate in Palau, and how it influences changes in lakes’ temperature, circulation, salinity and oxygen levels. They also will look at past and present microbes, algae and animals to see how they are affected by the climate and its changes.

The golden jellyfish of Jellyfish Lake in Palau are just one species this project will examine.

Lake sediments provide important records of climate and species’ community changes for the past 15,000 years, he said.

Researchers can use those records to relate patterns of environmental change to species in the lakes, and might be able to better predict how changes will affect other marine ecosystems and the services they provide to humans.

The team also includes UC Merced Professor Francois Blanchette, a mathematician who studies fluid dynamics, and Jessica Blois, a paleoecologist who’s joining the UC Merced faculty in January. Another collaborator, Julian Sachs, a paleoclimatologist from the University of Washington, gets a portion of the grant, leaving $1.37 in funding for UC Merced researchers, staff and students.

The team has worked for several years on analyses that laid the groundwork for this project.

Marine lakes are seawater lakes that connect to the ocean through fissures in rocks or tunnels. They remain isolated enough that some species evolve quite differently than relatives in nearby oceans.

The lakes weren’t widely studied until the 1970s, and were thought to exist only in Palau. But similar lakes have been discovered in many other places, including other Pacific locations, Russia, Vietnam and the Adriatic.

“These lakes are the marine analogs of the Galapagos Islands, the origins of modern evolutionary thought in terrestrial systems,” according to the website of the Coral Reef Research Foundation, which collaborates on the Palau research.

Beman’s work focuses on microbial communities in the lakes.

“Most people are familiar with bacteria and viruses that cause disease, but microbes play many important roles in the environment. For example, they conduct about half of all photosynthesis on Earth; if you add up their total mass, it may be equal to that of all plants,” Beman said.

Using advanced DNA sequencing, he’ll get extremely detailed views of the microbial communities and can see whether they have changed over time the same way the other biological communities have. The researchers will also examine interactions among microbes and large organisms.

Blanchette and graduate student Sydney Montroy are modeling the changes in the lakes over time – temperature, salinity and oxygen – to develop a more efficient way of predicting how changes will affect other such lakes, even those that have different species and conditions.

Groundwork for the NSF project was built partly on funding from the David and Lucile Packard Foundation. The foundation has given $400,000 so far, and just agreed to give $200,000 more this year. The money helps train western Pacific scientists in their own unique marine lake resources.

UC Merced also recently established an Agreement of Cooperation with the State University of Papua (UNIPA), in the West Papua province of Indonesia, which will help the UC Merced team and collaborating scientists at UNIPA conduct their research in additional marine lakes around the islands. The memo also links UNIPA to UC Merced and its research.