The goal of the UC Merced tribology research program is to fundamentally understand what happens at the interface between components moving in relative motion and applying that understanding to the design of effective and efficient mechanical interfaces.

All mechanical components rely in some way on the interfaces between solid materials. In some cases, materials have to stick together. In other cases, they have to slide or roll relative to one another. But in all cases, the efficiency of mechanical components depends on the tribology at its interfaces, i.e. friction, wear and lubrication. Tribology is not only societally relevant because of its potential to improve energy efficiency but is also scientifically fascinating because it is inherently interdisciplinary and multi-scale.
Interface engineering necessarily incorporates solid mechanics, fluid mechanics, material science, and design, and so requires an understanding of each of these areas, as well as where and how they overlap.

Interfaces also interact at multiple scales: interfacing components elastically deform on a macroscopic scale; relative movement between them is resisted by the interlocking of micro-scale surface features; and, at a very fundamental level, friction is due to atomic and molecular interactions at the nanoscale. Understanding the interrelationship between these phenomena will enable development of design tools with which friction and other interface behaviors can be controlled and then explicitly prescribed for a given application.

Some of our current projects are:

Moving components are typically lubricated using liquids, e.g. oils and greases, whose functionality breaks down at high temperatures. An alternative is to use low friction and wear coating materials, sometimes called solid lubricants. However, the most common solid lubricants, such as graphite, fail at very high temperatures (above ~300°C). We are working on identifying new coating materials for this purpose. Currently, we are studying AgTaO3 and related materials because: (i) they have a layered molecular structure that allows easy sliding between layers, (ii) the silver is soft and so provides low resistance to shear, (iii) they are hard enough to provide sufficient wear resistance, and (iv) oxides don’t have issues with oxidation. This project is in collaboration with the University of North Texas. 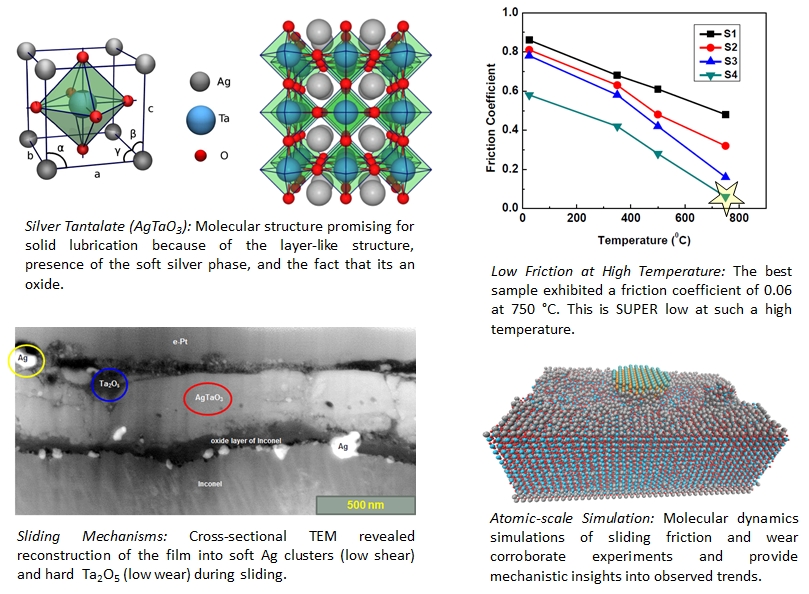 Viscosity index (VI) improvers are lubricant additives whose function is to arrest the decrease of viscosity that base oils experience with increasing temperature. This is a critical function since lubricant performance is critically tied to viscosity, temperature rise occurs in any sliding system, and viscosity decreases rapidly with temperature. VI improvers are typically polymers, but their exact chemistry in fully formulated oils is not commonly reported. We are working with colleagues at PNNL to design novel polymer chemistries. The UC Merced team is using molecular modeling to characterize the relationship between polymer chemistry, conformational changes those polymers undergo with increased temperature, and VI improver performance. Currently we are focused on star-branched structures that appear promising. This project is in collaboration with Pacific Northwest National Lab. 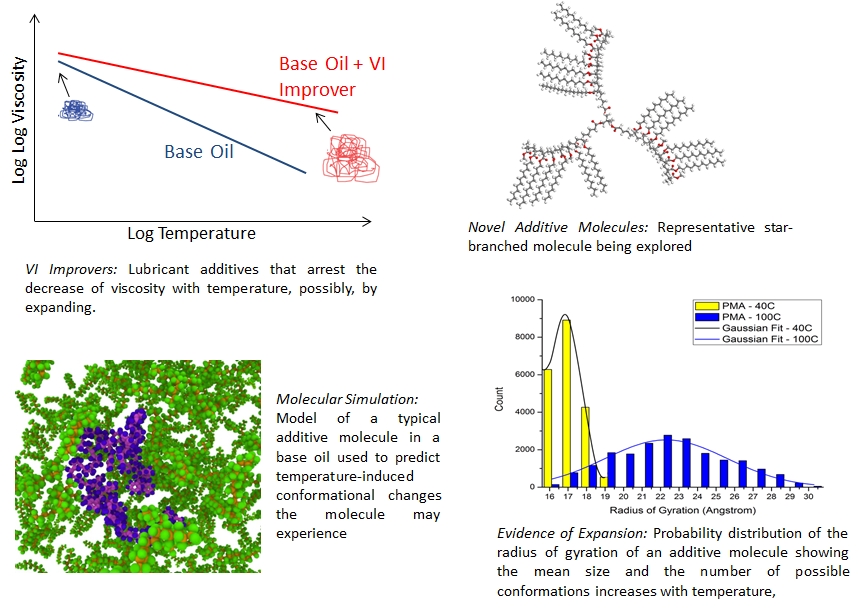 The atomic force microscope (AFM) is used ubiquitously in science and engineering to measure, manipulate and fabricate materials at the nanoscale. However, the resolution or accuracy of these techniques depends on the size and shape of the AFM probe, which can wear over time due to contact with the materials they are being used to measure or manipulate. Wear on the nanoscale is relatively uncharacterized and does not conform to the traditional models used to describe macroscale wear. Further, the conditions experienced by the probe during use are often unknown. We are using atomic-scale modeling to investigate  how AFM probes wear with the goal of providing guidelines for predicting wear and its effect on a given measurement or other AFM-based application.  This project is in collaboration with Lawrence Berkeley National Lab. 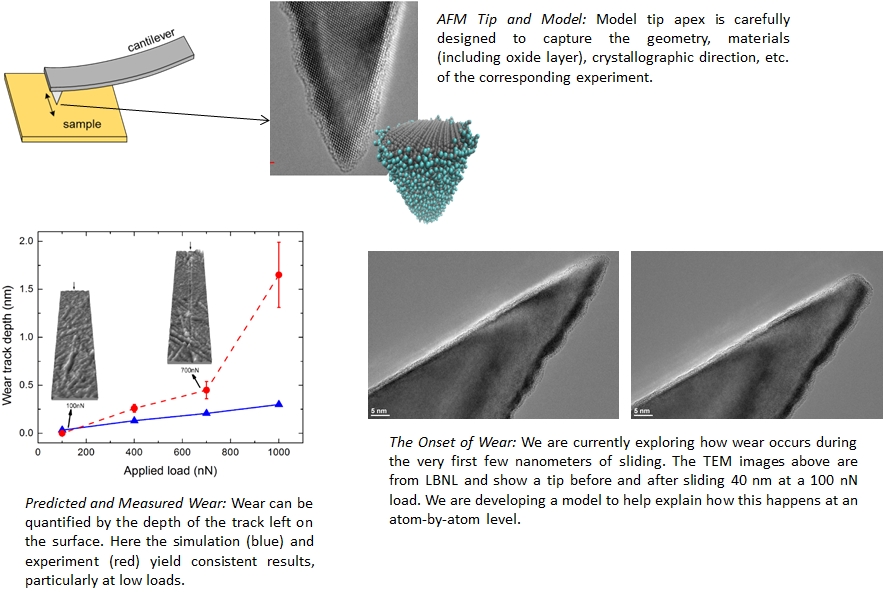 Stick-slip friction occurs when, as opposed to smooth sliding, two surfaces stick and then slip relative to one another. This can be observed at an atomic scale using an atomic force microscope (AFM) where the periodicity of the stick-slip patterns is the same the atomic lattice of the substrate. This gives us a way to study friction at a very fundamental level, hopefully with implications for frictional sliding at any scale. Currently, we are using atomic-scale simulation to model the apex of the AFM tip and the substrate. The model provides a way to “see” what is happening in the buried interface between the tip and substrate and so better understand the origins of sliding friction. This project is in collaboration with the University of Pennsylvania. 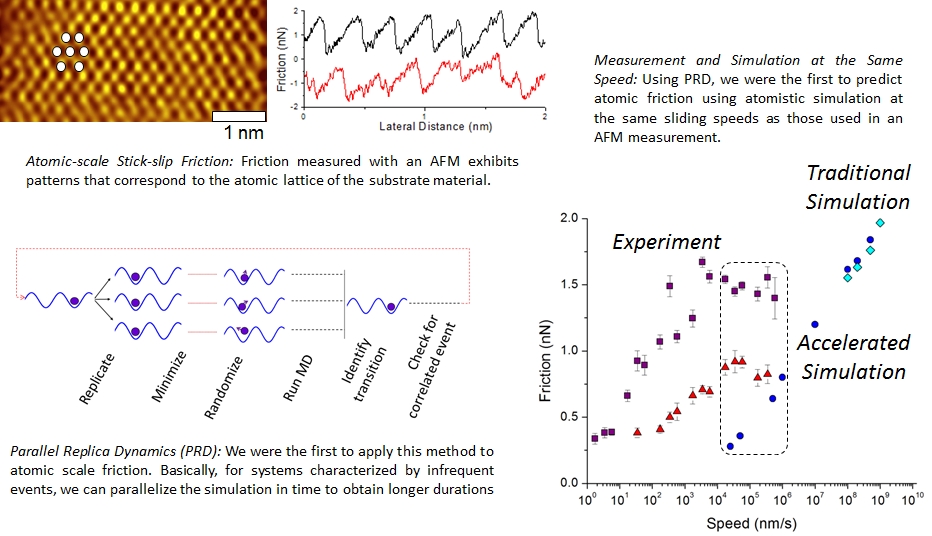 The formation and persistence of bubbles on the surface of lubricants reduces lubrication performance. However, foam routinely develops in lubricated systems due, for example, gear meshing. Antifoam additives, typically silicone based, are included in lubricant formulations to eliminate foam persistence. However, there is an issue with these additives now due to new lubricant cleanliness requirements. When fluid cleanliness is measured with optical particle counters, droplets of antifoam additive are recorded as particles, reducing the reported cleanliness of the lubricant.  Antifoam particle counts can be reduced by filtering, but this may adversely affect additive performance. We are studying the relationship between blending (additive chemistry, blending time/temperature), characterization (antifoam particle size/distribution), filtration (filter media and cycles), and additive performance. 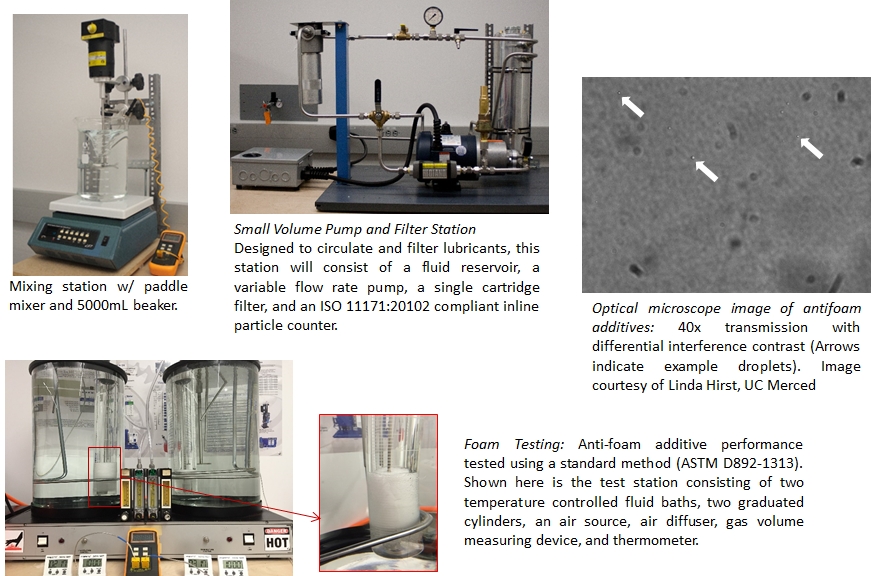 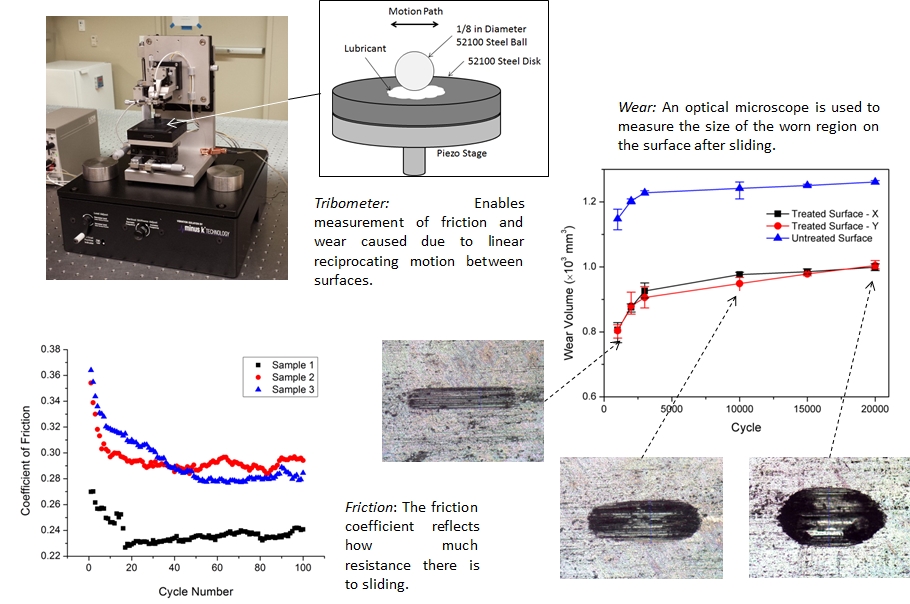 This research activity is being led by the Tribology Group (PI: Dr. Ashlie Martini).