The goal of the Energy Conversion & Storage research program is 1) to obtain fundamental understanding of charge transport and electrochemical charge transfer reaction in energy conversion/storage devices and 2) to develop high performance, durable and cost competitive devices through innovations in materials and design. The energy conversion and storage devices of interest include fuel cells, ionic batteries and supercapacitors.

Some of ongoing projects are:

The solid oxide fuel cell (SOFC) is one of the most widely studied fuel cells along with polymer electrolyte membrane fuel cell (PEMFC). Unlike PEMFCs, SOFCs are operated at elevated temperatures, usually > 800°C. Although the high temperature operation enables fuel flexibility (not limited to pure hydrogen), high fuel efficiency and use of catalysts free of expensive noble metals, it is also disadvantageous in terms of cell durability and the availability of cost-competitive sealants and interconnects. In order to lessen these issues, many efforts have been made to lower the operating temperature of SOFCs. However, reduction of operating temperature is unfortunately accompanied by a significant sacrifice in the kinetics of both charge transport and electrochemical reactions. In our program, we aim to develop high-power-density cells operating at a significantly lowered temperature with high thermal and mechanical durability and cost competitiveness by leveraging state-of-the-art nanotechnology.

There are several considerations to be made when developing durable and high-power-density LT-SOFCs. First, the electrolyte, electrodes and interconnects should be chemically stable at all operating temperatures and gas environments. Second, thermal coefficients of each component should be well matched each other for thermal durability under fast and repeated on/off cycles. Third, the electrodes and catalysts should be fine-engineered to maximize the powering performance with a given mass and volume. The electrolyte also needs to be highly dense but thin enough not to cause a significant charge transport loss. Additional measures should be taken to improve the thermal durability of each cell components through nanoscale functionalization and innovative material design. We will apply a combination of state-of-the-art nano-deposition (e.g. atomic layer deposition, etc.), thin film deposition (e.g. sputtering, evaporation, etc.) and conventional wet processes (e.g. spin-coating, screen printing, spraying, etc.). The ALD technique can be used to functionalize catalyst surface with an ultrathin coating and to prepare highly dense and nano-thin electrolyte. Highly scalable and cost effective wet processes will be used for preparing porous supports and electrodes.

Catalysis has long favored small particles as the catalyst. The initial benefit of being small comes from the maximized surface area to which reactants can have access, minimizing the cost and weight per function. The size of catalyst also has a direct impact on the catalytic activity itself because the percentage of surface atoms responsible for the catalytic properties increases with decreasing size. While nano-sized catalyst is preferred for higher performance per mass, catalysts with large surface areas are susceptible to sintering (i.e. growth of nanoparticle) during high temperature operations. Sintering of catalysts often results in the loss of catalytically active area due to growth in size at the expense of surface area. However, many important catalytic processes including carbon oxide oxidation, dry methane reforming and partial oxidation of hydrocarbons are performed at temperatures well above 300°C.

The objective of the project is to understand the impact of interfacing the catalyst of interest with a dissimilar material on the resulting thermal stability and catalytic activity. As the model system, we will specifically use a metal/oxide core-shell structure. A close-to-ideal oxide coating will be enabled by the state-of-the-art atomic layer deposition (ALD) technique, which enables the deposition of a conformal and uniform oxide shell with a sub-nm thickness control. The systematic study will provide a new body of information and insights on the nature of metal-oxide or oxide-oxide interface and may initiate a transformative opportunity for maximizing thermal stability and catalysis in high temperature systems. The study of diffusion and ripening behavior will be additionally beneficial to other areas where thermal agglomeration of materials is of a major concern; e.g. thermal coating, electronic devices, etc.

The performance of solid oxide fuel cells and electrolyzer cells (SOFC/SOEC) is largely determined by oxygen reduction/evolution reaction (ORR/OER) kinetics at the air electrode. While each unit 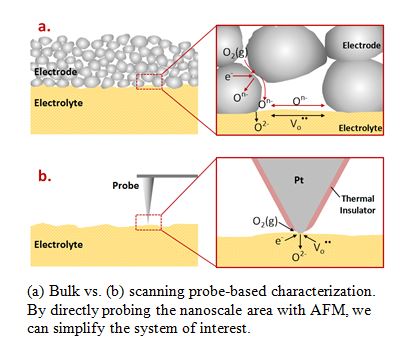 process of ORR/OER is an intrinsically nanoscale phenomenon determined by nanoscale material properties and geometry, the electrochemical properties have been mostly analyzed through bulk measurements. A lack of localized information precludes a clearer and more fundamental understanding of these processes, and thus limits flexible optimization of the materials and their geometry. Nanoscale in operando observation should enable us to go further and directly reveal the influence of material properties and geometry on the localized electrode activities.

We are using the Atomic Force Microscopy (AFM) as the main tool for nanoscale in operando electrochemical characterizations. In operando observations have been limited largely because ORR/OER and other intertwined processes would be barely activated at temperatures allowed by a conventional AFM. Through a combination of microscale heating stage (with an area roughly a million times smaller than that of a conventional AFM heating stage) and custom-made AFM probes, we will be able to directly explore localized variations in oxygen redox reaction and charge transport.

First, we will extract useful parameters governing the electrochemical reaction and ionic transport kinetics as a function of location at the heterogeneous interface and surfaces. These parameters such as exchange current density, transfer coefficient and ionic diffusivity will be quantified for different locations, temperatures of significance. These measured data and deduced information are directly applicable to establish a guideline for designing electrode/electrolyte interfaces. Our approach with the methods proposed in this work will render valuable information from nanoscale phenomena, enable a clearer fundamental understanding on the interplay between electrode reaction and charge transport, and eventually provide a useful building block to model, predict and understand macroscale electrochemical phenomena.

The needs for higher density clean energy conversion and storage devices are surging as demand grows dramatically in various domains ranging from hand-held electronics to electric vehicles and stationary power generation and storage. The recent advances in carbon nano-structuring opened up a new era of electrochemical energy systems due to the peculiar characteristics of 1D/2D carbon-based structures including extremely high surface area, electrical conductivity and catalytic activities (when doped or functionalized otherwise). In addition, carbon is ubiquitously available and potentially cost competitive unlike conventional noble metal-based catalysts. Although intense efforts have been made in this area recently, there is still wide range of opportunities to strengthen the functionalities and durability by tailoring compositions, defects and nano-morphologies through innovative fabrication processes.

In our program, we will focus on the following tasks: 1) To develop new cell fabrication processes that are cost competitive and scalable for mass production; 2) To perform the parametric study of conventional wet processes to correlate the fabrication parameters with the resulting electrochemical behaviors; 3) To study the impact of various surface functionalization and alloying on the durability and performance of electrochemical cells.

This research is being led by the EDSL Group (PI: Dr. Min-Hwan Lee)